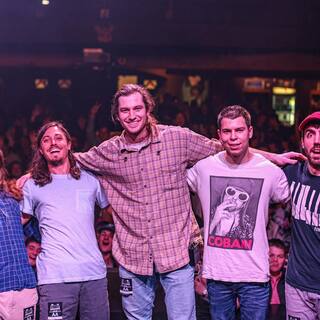 Thanks for your interest in spinning Peel, the third album from The Orange Constant!

The LP was recorded in the band’s homebase of Athens, GA over the course of multiple recording sessions that began in the fall of 2018 and spanned over a year. It was produced, mixed, and mastered by hometown hero John Keane (R.E.M., Widespread Panic, Indigo Girls) with whom the band recorded its first album, Time to Go (2015). Keane also added his signature pedal steel guitar on select tunes.

Peel arrived in May 2020 and solidifies TOC’s sonic spectrum; heartfelt anthems with catchy choruses ride alongside instrumental mastery with psychedelic undertones. With rich vocal harmonies, hooky riffing, and succinct songwriting, the album embellishes much of what Time to Go sought and captures the band’s most current lineup and sound.

Over the next month, you have the opportunity to own our first ever vinyl record. But in order for the wax to go to press, we need 100 orders. So please, spread the word about TOC and our campaign and let’s make this real.

Many thanks to Sam Balling and Carrie Hutton for the artwork and design.

We sincerely hope you enjoy!