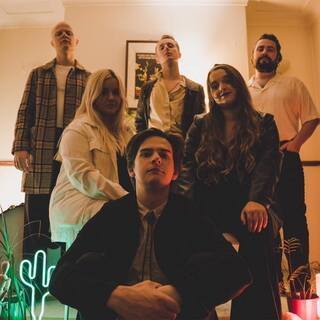 Talkboy are known for their own brand of playful, slightly off-kilter, big and bright sound.

Drawing inspiration from bands like Fleetwood Mac and The Beatles, through to modern contemporaries such as Alvvays, The Big Moon and Phoenix - the band’s sound, though bred in the Yorkshire dales of Northern England, has been nurtured to take on a much bigger and ambitious sound.

Their first EP, which was recorded with Mickey Dale (Marsicans), was noted by the press for its energetic, upbeat but mostly unique sound with particular focus on the shared vocals between Heap and Juniper. Tracks from the EP went on to garner support from Spotify with choice placements in New Music Friday UK, The Indie List, and Hot new Bands. Whilst at radio the EP had support from BBC 6 Music and BBC Radio One.

Talkboy have been fortunate enough to play a host of festivals such as Reading & Leeds Festival, Live At Leeds, Blue Dot and Y Not? in the UK. They have also toured with The Howl & The Hum, Declan Welsh and The Decadent West, and Honeyblood.