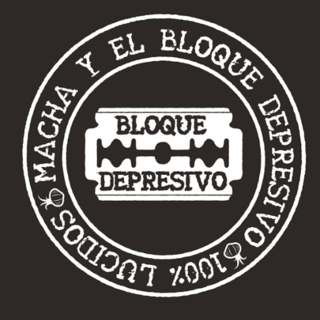 A key figure in post-Pinochet Chilean culture, Macha began his career with the punk band La Floripondio twenty-five years ago. He would go on to massive success with the cumbia group Chico Trujillo, which became one the most popular groups in Chile. In 2012 Bloque Depressivo was born during Chico Trujillo’s live sets — the part of the show where the band played their slowest, most depressing songs to clam down overheated audiences.

Bloque Depressivo’s repertoire is deeply rooted in the culture of Valparaiso, Macha’s hometown. The popular songs of this Chilean port are suffused with the luxurious sadness, romantic despair and perverse happiness of poets, sailors and sinners. Music to open your veins to? Maybe, but there’s few sounds sweeter than this musical cri de coeur to their hometown fans.

Their self-titled debut album offers 12 tracks of porteño classics and original compositions in the same, um, vein. Peruvian waltzes like “Cada Domingo a las Doce”  rub shoulders with gorgeous boleros and vintage romantic pop songs like “La Nave del Olvido”  All reworked with loving new arrangements by some of the finest musicians in Chile, and a deep bench of guest collaborators including Alvaro Henriquez of Los Tres.