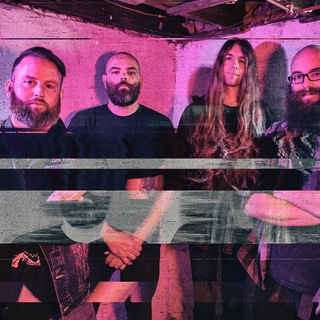 Years of tour experience, decades of studying music and a lifelong dedication to the underground. These are the things that have come to define Death On Fire, an Indiana death metal band who will never bend the knee. Formed in 2016 as a studio project by frontman Tim Kenefic, the project has rapidly evolved into a hard touring sonic abomination. Dedicated to crafting technical, interesting and above all, boundary breaking music, Death On Fire has rapidly built a name for themselves as road warriors, hustling across the country in the name of that next sick and twisted show. Intense and unapologetic, Death On Fire have come to embody the spirit of modern death metal.
Death On Fire have descended from a different musical ancestry from many of their contemporaries. While Carcass is perhaps an obvious point of reference, but multiple listens will uncover musical references to Frank Zappa and ABBA. These diverse influences have inspired their breakneck release schedule, with three releases in the last two years and another on the way. By dedicating themselves to constant content creation, Death On Fire have been able to scrabble for opening slots for Obituary, Phil Anselmo and many more icons of our age. This is a band who have strived, from the first to deliver the complete package and they are starting to get the success they so desire.
Having rapidly made an impact across the Midwest metal scene, the band is only growing in reputation and stature. This is the sort of forward thinking project which entire scenes revolve around. The breadth of the compositions never gets pretentious though, the band has been careful to counterbalance their work with a strong DIY mentality. There is a sense of struggle throughout the groups work that only serves to expand what they have done. Now with countless tours under their belt and many more to come, Death On Fire looks to take on the world